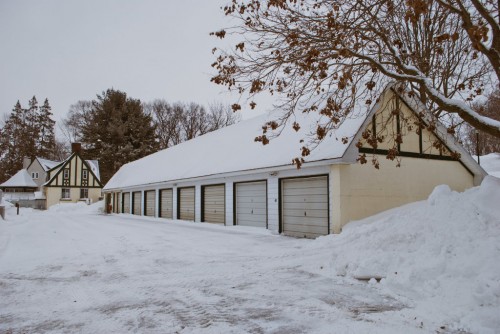 Garages behind the greenhouse (February 2015)

Behind the greenhouse on the KBS Gull Lake site is a structure that contains a workshop and an adjacent series of storage garages. It was built in 1975, at a cost of a little over $40,000.

A workshop had been long needed at the Gull Lake site.  At the time the workshop and garages were built there was already a workshop at the Physical Plant site on 40th street. The Physical Plant workshop was sometimes used by Art Wiest, a custodian based at the Gull Lake site whose work went well beyond what might commonly be thought of as custodial work. Graduate students also used the Physical Plant workshop to build their own research equipment. But that kind of use didn’t mix very well with the need of the Maintenance staff to manage its equipment and workspace for maximum efficiency. (These days we usually say “Physical Plant,” but back then everyone referred to it as “Maintenance.”) Mike Klug (KBS Director 1996-2003) remembers building some of his research equipment at home prior to the garages being built, due to the lack of a place at KBS to do the work.

Already back in 1958, it had been recognized that a workshop was needed. The 1958 proposal to the W.K. Kellogg Foundation that resulted in all of the “red brick” buildings on the KBS site, such as the Stack Research Building and the McCrary Auditorium and Cafeteria, had originally included a “student laboratory” that was to have been built next to the greenhouse. A workshop was to have been part of this building.

While the 1958 proposal was fully funded and all of the other buildings were completed, the student laboratory was never built. It may be that the capacity of the Stack Research Building was instead increased to handle some of the functions originally intended for the student laboratory. The Stack Research Building ended up serving as the main building for both research and classrooms, but in the end, there was still no workshop.

It wasn’t just the workshop portion of the building that was needed, though. In the 1970s, there was increased use of radioactive isotopes for biological field research.  Robert Wetzel’s research program was making substantial use of carbon and phosphorous isotopes as radioactive tracers, as was the program of Mike Klug, a newer member of the faculty at the time. While these techniques were growing in use at research institutions across the country, proper protocols were often lacking. Universities saw the need to invest in better facilities for management of radioactive materials and for waste disposal. Since this was an important issue at the time, it was not difficult for KBS to obtain Michigan State University funds for a new garage and workshop facility. Klug assisted in designing the portion of the building where radioactive materials could be stored and accidental spills could be contained, complete with an alarm and Halon fire suppression system to rapidly extinguish any fire in the room.

The building also includes a series of storage garages, one for each of the faculty research programs at the time. Long before 1975 research programs had been overcrowding the Stack Research Building. There was little elbow room for working in laboratories, and the hallways were lined with cabinets and large items could not be accommodated in the laboratories and offices.  While this made for a collegial environment where one always bumped into others, it wasn’t an efficient workspace. The garages helped to relieve some of the pressure, but the Stack Building was still very crowded. During this same time, George Lauff (KBS Director 1964-1991) was also at work garnering University support for two major grant proposals that ended up changing the appearance of KBS and did much to provide the present-day facilities.

The garages are a utilitarian building, not built in the “red brick” style that university architects had insisted be used for MSU structures back when the Stack Research Building was built in 1960. George Lauff wanted the new garages and workshop to be relatively inconspicuous and to blend with the old Tudor style of the nearby buildings built by W.K. Kellogg. So the building is nestled into the hill behind the greenhouse, and some Tudor styling can be seen on the gable ends.

Even though elbows have more room in the laboratories today, the building is still well used, as can be seen by the frequent foot traffic between the Academic/Stack building and the space behind the greenhouse.

(Thanks are due to Mike Klug and Mark Williams for providing information about this facility, and to Danielle Zoellner and Mike Klug for editorial comments.) 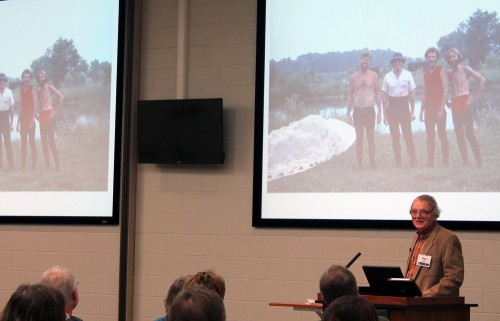 The weekend symposium celebrating 50 Years of Aquatic Ecology Research at the Kellogg Biological Station was greatly enjoyed by everyone. We who are currently at KBS enjoyed visiting with those of the long-time KBS community who attended, and the history team appreciated the opportunity to learn more from some of the participants about how the aquatic research program developed at KBS.

Below are some photos from the Friday night reception and the Saturday symposium. 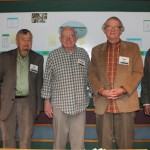 Below is a searchable list of Masters Theses, compiled by the staff of the Morofsky Memorial Library.  It is intended to be as complete as possible a list of the theses that resulted from the work of students in residence at KBS, or from research otherwise done at KBS.

The searchable list is in the process of being updated.  A PDF version of an updated one is here.

Below is a searchable list of Ph.D. dissertations, compiled by the staff of Morofsky Memorial Library and updated by Barbara Baker.  It is intended to be as complete as possible a list of the dissertations that resulted from the work of students in residence at KBS, or from research otherewise done at KBS.

A PDF version of the list is here.  It contains a few annotations that don’t appear in the searchable list. 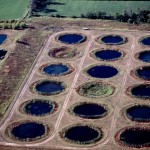 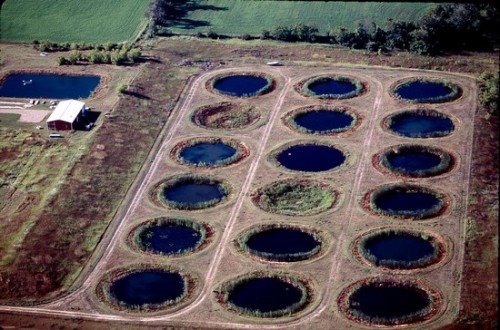 The Pond Lab is one of the distinctive features on the KBS landscape, especially as seen in aerial views.

The experimental ponds were built in the very early 1970s, soon after Don Hall was recruited from Cornell University by George Lauff to join the faculty at KBS.  Hall had done research in a set of experimental ponds at Cornell, along with Bill Cooper and Earl Werner, two other persons who  afterward came to Michigan State University.  Their work had been published in the journal Limnology and Oceanography, occupying an entire issue of the journal.  (Hall, D.J., W.E. Cooper, and E.E. Werner. 1970. An experimental approach to the production dynamics and structure of freshwater animal communities. Limnology and Oceanography 15(6): 839-928.)

After coming to KBS, Don and George wrote a proposal to the National Science Foundation to build a set of ponds here. Hall recalls that the early reviews of the proposal were favorable, but the NSF was reluctant to fund the grant because they didn’t support “bricks and mortar” projects.  Hall gives credit to Lauff for working to convince NSF that could and should fund this “bricks and mortar” project.  Hall suggested to Lauff that it be considered a set of “large, dirty test tubes” in which to do experiments, and Lauff was successful in conveying that message to the NSF.

It helped that John Brooks was the director of the Ecology division at the time. Hall recalls that he was very supportive of freshwater research.

(This article is based in large part on notes that Gary Mittelbach took during a meeting with Don Hall in November, 2012.) 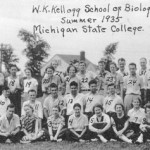 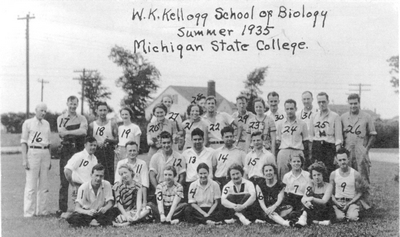 A Summer School of Biology was held at the Farm and Bird Sanctuary from 1929 through 1939, with a one-year gap in 1933.   The photo from 1935 that is shown here is the only one from the program that is known to exist.

The program was organized and headed by Joseph W. Stack, Professor of Zoology. He is No. 25 in the photo.   The other faculty members were Walter F. Morofsky (No. 29) and H.T. Darlington (No. 16).

Facilities were meager.  Students and instructors lodged, ate, and held indoor sessions at the Teachers’ Club House, a big two-story frame building on 40th Street that was used by teachers of the Agricultural School during the regular school year.

Stack described the early days in a brief talk he gave at the dedication of the Gull Lake Biological Station in 1954, twenty-five years later.

Although we had planned to start our Field Biology School June 23, 1929, we didn’t get positive authorization until two days before that date. The Staff members were Dr. Morofsky, Dr. Darlington, and myself. In two days we had to obtain beds, mattresses, cooking utensils, china — and what crockery — from Wells Hall; groceries and a cook. If it hadn’t been for the enthusiastic and untiring spirit of Dr. Morofsky and the willingness of Dr. Darlington, I’m afraid we would have been days late in opening the first Field Biology School. For ten years we went through the same procedure — never knowing until the last minute of registration whether we would have enough students to warrant having the School. However, the attendance did increase from eight students to a maximum of twenty-four from 1929 through 1939.

Stack may have taken literary license in describing the very first year, or perhaps he had compressed his memory of those days, because from other evidence in his papers it seems that he was the only instructor  in 1929.   He taught Field Biology, Zoology 303, Zoology 314, and Zoology 201, with one to four of the eight students in each class.  No Botany class was held that first year. (Darlington was the Botany instructor in subsequent years, and Morofsky taught Entomology.)

The first year was also different in that lectures were held on the main campus in East Lansing.  The students and instructor came to “Kellog’s Biol. Lab” for only two days for each of five weeks, arriving early enough on Friday to take three meals at the Kellogg properties, and returned late on Saturday.  A night’s lodging cost 50 cents, and meals were 50 cents each.  A typical bill for each student was $3.50 each week – for 6 meals and one night’s lodging.

But it seems that in subsequent years, the sessions took the form described by Stack in his 1954 talk.  And it seems to have been true that it was touch-and-go each year as to whether there would be enough students to hold the summer session.